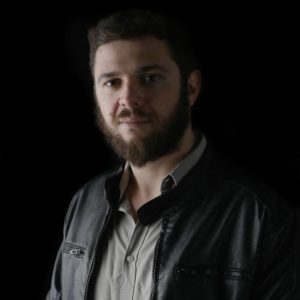 His first official recording work dates back to 2003 with the release of “The Red EP” by Diane and The Shell, produced by Edwood Records and distributed throughout Italy by Goodfellas, band founder and bass player until today.

The Red Ep promotional tour will see him involved with D.A.T.S.  in many live performances including the Ypsigrock festival, an internationally acclaimed event held every year in Castelbuono in the province of Palermo, opening to the Norwegian Motorpsycho. The second Diane And The Shell album is produced by the American independent record label Australian Cattle God Recs and will be released in North America and Japan.

Album release was supported by a long foreign promotional tour in U.S.A. and band performed at the New York CMJ festival music event and in 2006 at the MilanoFilmFestival.

The long Diane and the Shell promotional tour will see him again in 2007/08 on a foreign tour (Ireland) and on the national territory always on bass and a toy keyboard.

In the same year he take part in a music workshop organized by the music conservatory of Catania, with the Delta Saxophone Quartet.

In 2010 he recorded the album “Jack Rozz”, a totally impro-punk-jazz album with the American musician Ricardo Lagomasino, jazz drummer and session musician in the band of Joe Lalli, (former bass player of Fugazi) released the following year by Doremillaro Recs.

In 2011 he graduated from the High School of Musical Specialization of Saluzzo as Audio-VIdeo Engineer and in the same year worked at third Diane And The Shell album “Barabolero”, a record mixed by John Mc Entire (Tortoise), in addition to having played the electric bass will be engaged as a sound engineer in the mastering sessions. the record will be produced by the independent label Doremillaro (sb) Recs which he founded in the same year. During this time he lives and works in Rome as a post-production audio assistant.

In the same year he recorded the debut ep of songwriter Mapuche: “Anima Latrina”.

In 2012 he produced and recorded the punk-pop album of the band Bestiame: ”Transumanza Express” , the band also engaged him as director for the video clip of the single “Piccoli Muccioli”. In the same year he produced the EP of the singer-songwriter Calogero Incandela: “Di Demo in Peggio”. In same year after some years spent between Turin and Rome he settled back in his home town Catania and began working as a resident sound engineer at the Barbaradiscolab club.

In 2013/14 he played bass as a session musician with many artist: Mapuche (Enrico Lanza), Stefano Alì, in the solo of musician Andrea Romano (former keyboard in Albano Pover) known as “il Fratello”;  the same year he recorded most of the bass tracks of Veivecura’s “Goodmorning Utopia” (produced by La Vigna Records) project of sicilian musician Davide Iacono. He also takes part in some concerts of the Improvvisatore Involontario impro-collective, founded by Francesco Cusa. As a video maker he collaborates with the singer-songwriter Colapesce (Lorenzo Urciullo), as editor for videoclip of the song “Oasi”. He recorded and produced the album of the synth pop project “Smegma Bovary” released for his own label Doremillaro (sb) Recs.

In 2014 he performed as keyboard player with the Smegma Bovary band(of which he is also producer), winning the Arezzo Wave Sicily selections and performing in Arezzo for Arezzo Wave Festival. He is also involved with sound engineer Tony Carbone (bass player in Denovo band and well known sound engineer for Carmen Consoli) playing bass in third Mapuche’s work, the EP “Compreso il Cane” produced by Viceversa Records and distributed by Audioglobe.

In the same year, he mixed the debut album by the Catania songwriter Claudio Palumbo.

In 2015 the punk-jazz record Catania Violenta was released by Setole Di Maiale, he featured on electric bass together with jazz drummer Francesco Cusa (drum professor at  Monopoli conservatory) and impro guitarist Chris Iemulo. In  same year, he produced played bass and released for Doremillaro the debut EP Beginning Is The Best Failure by Before We die band.

By the end of 2015 as a musician he took part in the recordings of a new Mapuche record “Il Sottosuolo”, published by his Doremillaro (sb) Recs and Bandbackers. He played both bass and other instruments (kaoss-pad, glockenspiel), the artistic production is by Cesare Basile.

Between 2016 and 2017 he performs live bass with the Erri project by Carlo Natoli (Gentless3, Francesco Cusa Skrunch).

In September 2017 the mix of the second Livestock album ends and produces (artistic production, shooting and mix) the debut EP of Felice Briguglio (ex Flx).

In 2018 he supervised mastering of Alex Munzone second album”Giordano Bruno” and produced “Synderesis” by Antonio Aiello, also performed with italian songwriter Dino Fumaretto (Elia Billoni) on bass and Andrea Sciacca (Di Viola Minimale, Pantomima Band, Naked Musicians). In this period he works fervently as a live freelance sound engineer. In the same year he was active as a sound director for the documentary “A Shameful Story” by Nella Condorelli and for the minidoc on Briganti Rugby of Catania by Fabrizio and Bruno Urso. Worked as microphonist for the fiction film “Sara & Marti – Il prequel” produced by Disney Channel Italia and directed by Emanuele Pisano.

In August, enter the largest cooperative of entertainment professionals in Italy: Doc Servizi.

In 2018 & 2019 he played and conducted at impromeet, Catania Improvised Music Festival.

Between winter 2018 and spring of 2019 he realizes the Catania Non Esiste project, a compilation of music from Catania, a project aimed at promoting the  musical culture in the city.

In summer 2019 as videomaker shooted videoclip of Smegma Bovary:”Sabato a Taormina”.
In 2018 & 2019 he played and conducted at impromeet, Catania Improvised Music Festival.

Actually working and mixing the forthcoming albums of Smegma Bovary, Diane And The Shell, and working on his first soloist album.

In March 2020 released his first track of his solo project: Lacinskij.

Lives and works in Catania.

2015 – Before We Die “Beginning Is The Best Failure” – Doremillaro (sb)Recs (bass player, recording)

2020 – Voice Feat. in “Enterprise” from “Canzoni Assembrate” by Tazio Iacobacci