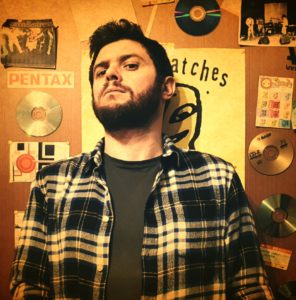 Lacinskij is the italian musician Giuseppe Schillaci: bass player, sound engineer, composer, sound designer, producer and head of Doremillaro [sb] Recs. For full bio and complete discography please refer to this page: www.doremillaro.com/giuseppe-schillaci-en
He played and toured abroad between Europe and U.s.a. with his main band Diane And The Shell. Over the years he has also worked, played and collaborated in various forms with many musicians (Veivecura, Mapuche, Alì, Colapesce, Cesare Basile, Uzeda) and songwriters both in studio and live productions, appearing in more than 20 albums as musician or producer/sound engineer and performing hundreds of live concerts. his first solo release, “Sound[e]scaping vol. I“, an album influenced by contemporary electronic music and 16 bit era videogames music was released on his own label Doremillaro [sb] Recs in 2022.

He is currently working on his new album “The Re-Cover Session Vol. I” in which he reinterprets both Italian and international songs featuring many  musicians.

Zōlfo+Salicornia is the new album by Sicilian musician and composer Lacinskij. Six tracks conceived thanks to the project “Cantieri In Movimento-Industrial Heritage Soundscape”, realized with the support of the mic as part of the call Boarding Pass plus 2021 presented by Zo centro culture contemporanee. The project focused on the enhancement of material and intangible heritage linked to industrial archaeology, under the artistic direction of Teho Teardo. Composed between Catania and Dresden, these 6 compositions were originally designed for the installation of sound & video art. Three of them are part of “Zōlfo”, made by the main artistic group in which the composer is involved, inherent the former sulfur refinery located in Catania and divided into three different movements “past, present and future”, in an attempt to tell the story of a place that changes along with the changing socio-economic fabric of the city in which it stands. Then tell on one side Catania, a city that contains all the chaos typical of a large city located in southern Italy and on the other the center Zō, sulfur refinery, then gym today multidisciplinary cultural center. The other two tracks were composed for the other artistic group involved in Cantieri in Movimento and their interactive installation called Salicornia.

Salicornia is a plant that grows in the eastern part of Ukraine, precisely in the city of Soledar in Ukraine and Sicily. While most plants would never survive extreme amounts of salts in the soil, Salicornia uses them to grow and develop, Showing how approaching things from a different perspective can completely change the direction and outcome of one’s actions. Lacinskij worked on field recordings provided by the members of this installation, field recordings that describe the consequences of destructive events in Ukraine and are “dissolved” into pieces to “crystallize” the new digital audiovisual life form, thus embracing the philosophy of the Salicornia plant both physically and metaphorically.

To close the album another composition originally conceived for the project but not included in the art installation project, then developed with the collaboration of some artists known by Lacinskij during the development of the project between Dresden and Catania. Lacinskij played synth, piano, electric bass and samples elaborating and manipulating all the sounds to distort them and turn them into something else.

The record was made using a sampler, vst, digital apps, iPad, field recordings recorded with the smartphone, a live akai mpc, electric bass, electric guitar and various noises recorded with a smartphone. All reworked on Daw (Logic Pro X) in an attempt to transform everything that had been recorded and transform it.

Giuseppe “Lacinskij” Schillaci created, edited and manipulated almost every sound in this record.

Sound[e]scaping vol. I is the debut album by Doremillaro [sb] Recs founder, musician, sound engineer and composer Lacinskij, also known as Giuseppe Schillaci. As a musician, he has toured many times both in Italy and abroad, with the band of which he is one of the founders (Diane And The Shell) and the various bands with which he has played and collaborated as a musician, sometimes as a sound engineer, as a producer or as an improviser.
Sound[e]scaping vol. I is an album made of entirely electronic-digital music, a bit unconventional, that takes its cue from the 90s videogames soundtracks (the 16-bit consoles and home computers era) and the 80s synth music sound, as well as being influenced by the minimal music and some early 2000s electronics music.
A simple, direct and mainly instrumental work. Synthesizers, electric bass, very few guitars and electronic drums.
As the title itself suggests, the album is conceived to be enjoyed and listened from a visual perspective. Everything in this album has been inspired by not just the natural background but also acoustically, so every track on the album can be thought as a soundtrack of imaginative and escapist landscapes. The tracks harmonic development is designed as a progression, crossing an ideal ambient where music substitutes natural sounds.
Sound[e]scaping vol. I was composed between summer 2019 and spring 2020.
Eight different tracks, all linked by the idea of a virtual soundtrack of landscapes to explore, where you can find sounds from the past and there is still at work modern music influences.